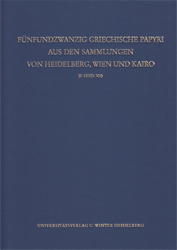 This monograph comprises the edition of and commentary on 35 previously unpublished Greek letters on papyrus, preserved in the Department of Papyri of the Austrian National Library. The edition follows the plan established for the Corpus Papyrorum Raineri series, namely description, critical edition with apparatus criticus, German translation, and detailed commentary. The letters come from the Roman, Byzantine and Early Arab Egypt (2nd to 7th cent. A.D.). They offer multifarious information on the development of late antique epistolography and of the Greek language over a period of roughly five centuries as well as sheding new light on various aspects of the social and economic life and administration of the Eastern Mediterranean at the end of antiquity. They will be of interest not only to papyrologists, but also to classicists, linguists, lexicographers, palaeographers, ancient historians, historians of law and Byzantinists alike.