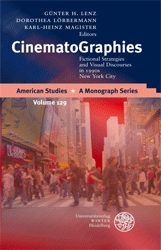 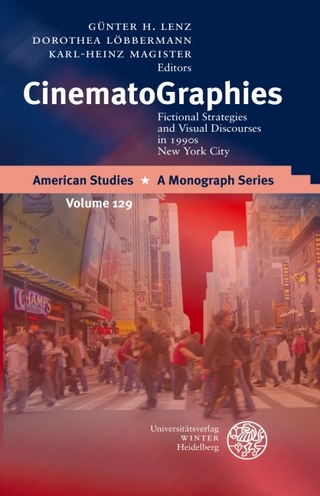 This volume explores modes of urban representations that focus on the visual and on movement, both in the media of literature and film, as well as in discourses of migration, tourism and social movements. The collection of essays thus addresses the visual both in its materiality, as in architecture, art, film, photography, and in the imagination, as in literature and writing in general. Urban spaces are conceptualized as potential contact zones for different ethnic and social groups which, increasingly, are not necessarily characterized by a territory of their own, but are often translocal, discontinuous, displaced, and displacing. The essays investigate the tensions between various kinds of hybrid texts about New York City whose simultaneity is an articulation of the "creative energy" of city life. They are a contribution to the analysis of the cultural work of contemporary urban fiction, film, and other urban discourses. Table of Contents: Introduction. - In the Shadow of 9/11 Peter Brooker: Terrorism and Counternarratives: Don DeLillo and the New York Urban Imaginary Kristiaan Versluys: Frédéric Beigbeder's Windows on the World or 9/11 as the End of Irony Embattled Urban Spatialities and Moving Images Steven Jacobs: Between Main and Mean Streets: Martin Scorcese's Fragmented New York Kim Förster: ABC No Rio's Oppositional Spatiality and Iconography: A Study of the Politics of Space, Community, and Art Dorothea Löbbermann: The Homeless Body and New York City: Spectacle, Representation, Embodiment Camille Fojas: Boxing Women and the New Spectator: Gender, Race, and the City in Girlfight The Transnational Imaginary and Cinematic Perspectives in Film and Fiction Holger Henke: Brooklyn Babylon: The Reproduction and Consumption of Cosmological and Epistemological Space in New York City Karl-Heinz Magister: Trans-Caribbean CinematoGraphic Narratives in Jamaican Urban Diasporas Sladja Blazan: I See You: Cinematic Perspectives and the Hyper-Other in Literature New EthniCities and In/Visible Cities Günter H. Lenz: Re-Envisioning Metropolitan Spatialities, Diasporic Identities, and Intercultural Narratives: Fictional Strategies and Visual Discourses in 1990s New York Novels Antje Dallmann: ConspiraCity: The Literary Discourse of the In/Visible New York Jeroen Lievens: The Woman at the Window: Spatial, Visual, and Sexual Dislocation In Lynne Tilman's No Lease on Life Showcase New York-New Trajectories Bart Eeckhout (Ghent): Creative Destruction of Times Square: Redefining Space and Understanding New Trajectories at the Crossroads of the World